Skin Slipper inventor and company owner, Debi Byrnes, has made it her life’s mission to help others with skin problems; a passion which began with her own skin, as she began experiencing painful, unsightly cystic acne at the age of thirteen.  Teenage years are hard enough to cope with, even without ugly, painful lesions all over your face and body.

Finding herself in adulthood and still plagued with skin issues, Debi became a skin care therapist and worked at an acne clinic.  She began helping teens clear their acne and watched as their self-esteem soared. She felt so strongly about helping teens that she decided to volunteer at a relevant organization to teach what she had discovered.  Surprisingly, she couldn’t find any existing non-profits that needed this type of service, so she started one of her own, called Clear Up Skin Care.  Through Clear Up Skin Care, she was invited to public school health classes to teach middle and high school students about skin care. More importantly, she explained the value of high self esteem – something that doesn’t have to be sacrificed just because you have a huge pimple on the tip of your nose.

While treating her own acne, Debi found that many of the harsh active ingredients in products used to control acne caused her fingers to become rough and irritated. She also realized Benzoyl Peroxide, a compound frequently found in acne treatments, comes with the irritating and expensive side effect of bleaching towels (and clothing), wherever she wiped her hands after application.

Debi set out to find an applicator to alleviate the problem, but was unsuccessful.  Again, she decided to take matters into her own hands; that was the beginning of her journey to develop Skin Slipper, an applicator designed to take care of the problem once and for all.

Many topical products used for muscle pain relief have a strong mentholated scent. When these topical products are applied using the fingers it is extremely difficult to remove the odor. Even after washing with soap and water, the scent of many of these products lingers on.

Fingers can become irritated when used to apply topical products, such as flea control medications, to family pets. 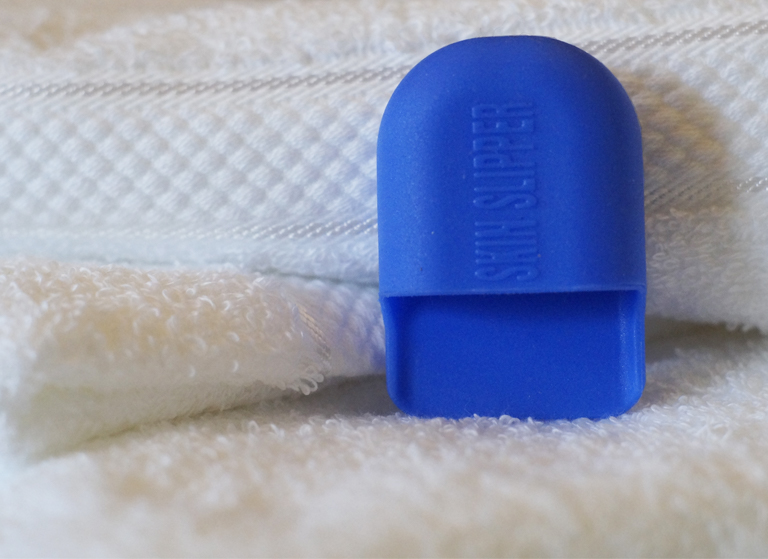 Skin Slipper alleviates these problems and more, because it:

Skin Slipper is constructed of hypoallergenic silicone material, meaning it is latex-free, pliable, non-absorbent of product ingredients, and water impervious. The side used to apply products is textured and padded to enable the user to easily guide the implement over the surface of the skin. Simply slip it over your pointer and middle fingers, and you’re ready to go! After application, just rinse Skin Slipper to make it ready for future use.

Acne is the most common skin disorder in the United States, affecting 40 to 50 million Americans (American Academy of Dermatology). Nearly 85% of all people have acne at some point in their lives. By mid-teens, more that 40% of adolescents have acne. 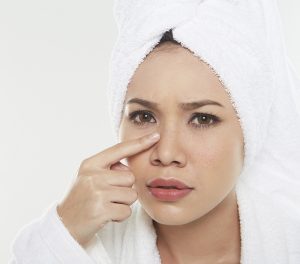 Topical products used in the treatment of acne to exfoliate the skin and unclog skin pores include benzoyl peroxide, glycolic and salicylic acid. When using these products on a continuing basis, they may cause the fingers to become rough and irritated.

Because of the peroxide (bleaching agent) contained in benzoyl peroxide, it is very common to ruin a towel after applying the medication using the fingers, rinsing them with water, and then wiping them off on a towel.

Psoriasis is an autoimmune disease that causes raised, red, and scaly patches to appear on the surface of the skin. It affects 7.5 million people in the United States and approximately 125 million worldwide (National Psoriasis Foundation).

Two of the common topical products used to treat psoriasis contain either salicylic acid or coal tar. If the fingers are used to apply these solutions to an affected area, the fingers can become rough, red, and irritated. Also, if there is residual product on the fingers and they inadvertently come into contact with the eyes or private parts of the body, the individual may experience extreme irritation to these areas.

Eczema causes the skin to become red, itchy, and inflamed. More than 30 million Americans have some form of eczema (National Eczema Association).

Many products used to treat eczema contain hydrocortisone steroids in varying degrees of strength. If the fingers are used to apply these solutions to an affected area, the fingers can become rough, red, and irritated.

Basal cell carcinoma is the most common form of skin cancer. An estimated 2.8 million cases are diagnosed in the United States annually (www.skincancer.org).

inadvertent contact with mucous membranes due to the potential for local inflammation and ulceration.

Fibroymyalgia is a common chronic pain disorder that causes widespread pain and tenderness throughout the body. Approximately 10 million Americans have fibromyalgia (National Fibromyalgia Association). Topical capsaicin is used to help severe fibromyalgia pain. Capsaicin is the active component in chili peppers that causes a burning sensation where it touches tissues.

Hormone replacement creams (estrogen and testosterone) for both men and women are becoming more and more common. If, for some reason, individuals are unable to apply these products onto themselves and need another person to apply them, it is important that the person applying the medication not come into direct contact with it. These topicals are extremely potent, are absorbed into the bloodstream, and nay have damaging or unwanted effects.

Many people don’t realize that, when using the fingers for hormone replacement application, there may be a residue that remains on the fingers. There exists the possibility that residual hormone may inadvertently be transferred to children or pets. This can lead to various unwanted and detrimental results.

Cosmeceutical/beauty applications include topical products used to reduce the buildup of dead skin cells on the surface of the skin and to diminish wrinkles. Primarily these include Retin A, vitamin C, glycolic and salicylic acids. These products are designed to cause the dead skin cells to slough off. They can also cause the fingers to become dry, irritated, and rough.

This site is still under construction, but please check back soon if you’re interested in purchasing Skin Slipper. If you’d like to get in touch with Debi about the availability of this product, please contact us through the web form here.